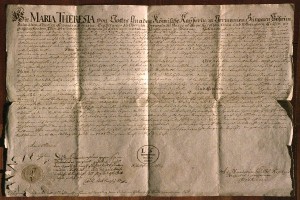 We, Maria Theresa, by the Grace of God, Empress of the Romans, Queen of Germany, of Hungary, of Bohemia, of Dalmatia, of Croatia, of Slavonia; Archduchess of Austria; Duchess of Burgundy, of Styria, of Carinthia and of Carniola; Duchess of Württemberg; Princely Countess of Habsburg, of Flanders, of Tyrol, of Gorizia and of Gradisca; Duchess of Lorraine and Bar, Grand Duchess of Tuscany, by virtue of this letter publicly acknowledge and promulgate to the people that our loyal and dear Judge and the Councillor of our sovereign princely town of Novo Mesto in our Duchy of Carniola have submitted their most humble petition, unto which we, to the aforementioned town, in a reply to said report which was entreated by our Inner Austrian Privy Council, and received by us on the eighth of January in this year of our Lord, have thus bestowed on the sixteenth of April on the grounds mentioned above our gracious consent, namely that the local Franciscan friars may in the very same place of Novo Mesto, publicly edify six lower school levels, from parva to and including rhetorica. Furthermore, we have been humbly entreated, as Queen Regnant, Madame and hereditary Princess of the Inner Austrian Princely Lands to confer graciously upon the thusly founded school the same liberties as those being possessed by other grammar schools in our Austrian hereditary lands. The humble entreaty of the petitioners was surveyed with predilection, not only because the introduction of the aforementioned six lower levels would be salutary for the poor townsfolk of Novo Mesto and would thus assist their betterment, but also to give the local youth the opportunity to be cultivated in religious teachings and virtues and edified in lower levels with less expense. Hence, youths could attain a higher level of education and acquire the qualification and appropriateness to serve their community. Therefore, with prudent resolve, upon thorough deliberation and extensive examination of the subject matter, we decided to once again bestow, grant and confirm the founding of the aforesaid six-level school in Novo Mesto. On the basis of the Royal and Sovereign Supreme Authority we shall conduct, observe and affirm the very same, and shall by the power of this letter, decree, depute and will that the Franciscan friars publically hold and run the previously aforementioned school instruction in six lower levels in Novo Mesto, and that the thence founded grammar school shall possess such privileges as possessed and enjoyed by other established grammar schools, by way of consent from a Sovereign Prince, and for the youths to be admitted, following the completion of the lower levels and upon submission of ordinary school-leaving diplomas in all places where they might continue their higher education and pursuit of knowledge, without any objection whatsoever. With grace and in true earnestness, we order all and any of our subordinate ecclesiastical and secular rulers, especially our present and future Deputies, Provincial Marshals, Governors of the Province, Provincial Administrators, Provincial Vicedomes, likewise the Rectors and Superiors of universities and grammar schools in our Austrian hereditary lands, and furthermore any of our officials, underlings and subjects notwithstanding their honour, rank or position to allow the repeatedly mentioned grammar school in Novo Mesto, in which the six lower levels will be publicly taught by the local Franciscan friars, to operate in peace, to consider it the equivalent of other grammar schools which have been founded upon the consent of a Sovereign Prince, to freely admit youth who shall from thence pursue further education upon submission of ordinary school-leaving diplomas. Moreover, we decree that said grammar school, based on this gracious privilege, is to be protected and defended by them in their capacity as rulers, that they themselves shall not act in contravention with these provisions nor hinder matters, and disallow others from acting in any fashion whatsoever or through any means whatsoever, lest they wish to fall into grave disgrace and be subject to punishment. We are earnest, of which this letter shall bear witness, confirmed with our Imperial, Royal and Archducal Seal affixed thereto. Given at our town of residence of Vienna, the eighth of August, in the year of grace one thousand seven hundred and forty-six, in the sixth year of our reign.

The original is kept in the Franciscan Monastery in Novo mesto.